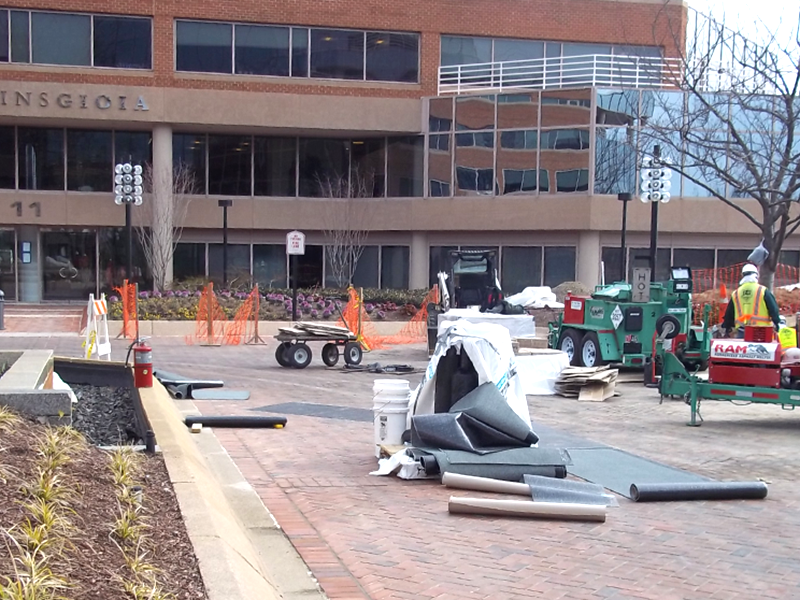 The Virginia cultural site of Canal Center Plaza hosts visitors from around the globe. A striking cluster of modern buildings occupies the site of the original river lock of the Alexandria Canal, which connected Alexandria to Georgetown and the C&O Canal. The tide lock of the canal was one of four locks that lowered boats nearly 40 feet from the C&O Canal level to Alexandria.

Just north of the canal lock is “Promenade Classique,” a sculpture garden created by Anne and Patrick Poirier, French artists who incorporate archaeological and mythological references in their works. A brick plaza leads to a rectangular pool containing a carved human mouth with water spewing from its lips. A cascading waterfall leads to twin spiral staircases and a grotto of sculpted ruins overlooking an amphitheater and culminating in a 40-foot high marble obelisk, reminiscent of the nearby Washington Monument.

The Plaza buildings were plagued with miscellaneous leaks and Ev-Air-Tight, Shoemaker replaced the waterproofing on all terrace decks within four buildings. Sealants were replaced and windows wet glazed on all facades, which were also completely repointed.

What Others Are Saying