There is more to tuckpointing than merely putting mortar in cracked mortar joints. You can count on Ev-Air-Tight to properly tuckpoint your failed masonry joints.

Mortar joints between masonry units such as brick, block, and stone will deteriorate over time, which will allow water intrusion and ultimately failure to the units. The repointing process involves removal of the deteriorated mortar, installing a new compatible mortar. Ev-Air-Tight’s experience includes repointing of all types and upon your request, will have your mortar composition tested for an exact match. It is critical to the integrity of the masonry that the proper mortar mix is made and installed. There are different types of cements, aggregates and pigments that must be chosen to create just the right mortar mix in order to properly perform a tuckpointing job. The joints must be carefully prepared to accept the new mortar without damaging the surrounding masonry. This requires skilled and trained mechanics. Ev-Air-Tight prides itself in the quality of our workers and the care they take to assure their work is the best in the industry. 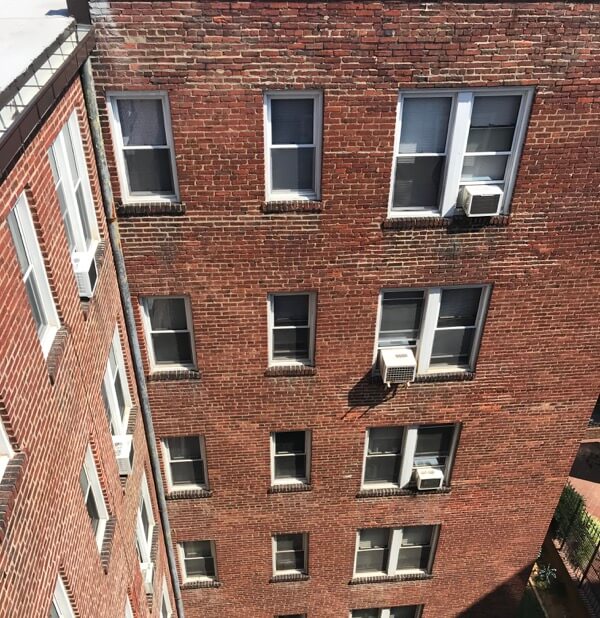 Tuckpointing is a term which you may never have heard of before, especially if you’re not familiar with all the jargon used by masonry professionals and contractors. As you may know, the mortar used to secure bricks or stones in a building will always wear down over time, primarily because of constant exposure to the elements, e.g. wind, rain, snow, ice, sleet, and hail. When that mortar begins to break down, it has to be replaced so that the structural integrity of a building can be maintained, and the interior can be kept safe for occupants and their valuables.

This is where tuckpointing comes in. That old, worn-out mortar can be removed and replaced by tuckpointing, which fills the joints between bricks or stones with fresh mortar that matches the color of the bricks or stones, after which a thin layer of putty would be applied between the joints, so as to contrast with the bricks’ color. This contrasting color makes it obvious that the joints are well-maintained and that there is a narrow, attractive line which differentiates stone from mortar.

By the way, this last step of adding contrasting putty is the only difference between tuckpointing and repointing, which only involves the first two steps of removing old mortar and replacing it with newer material. Tuckpointing can actually be used on any building which is constructed of brick or stone, but it is commonly used on buildings which have historical significance, so that the original thin joints installed can be re-captured and featured once again.

Brick Pointing for your Commercial Building

While a skilled do-it-yourselfer could probably accomplish the work needed on a tuckpointing project, this is a task best left to professionals such as the specialists at Ev-Air-Tight, Shoemaker, Inc., where we routinely tackle tuckpointing projects for our loyal customers. It’s very possible that the mortar between the joints of your building’s bricks or stones were degraded by weathering, but there are other reasons why the mortar could deteriorate as well.

If it happens to be because the weight of the upper part of your building is causing cracks to appear, that is a situation which must be addressed by more than mere repointing or tuckpointing, since the same thing would happen again after the work was done. That’s why a professional is needed, so that the cause of the cracking can be identified, and the root cause can be corrected before any repairs are carried out.

If you need any kind of repointing or tuckpointing service carried out on the mortar joints of a building you’re responsible for, please contact us at Ev-Air-Tight, Shoemaker, Inc., so we can restore your building to structural soundness and its original great appearance. You can be confident that you’re working with the best masonry specialists in the entire area around Northern Virginia, Maryland, and the Washington, D.C. area.